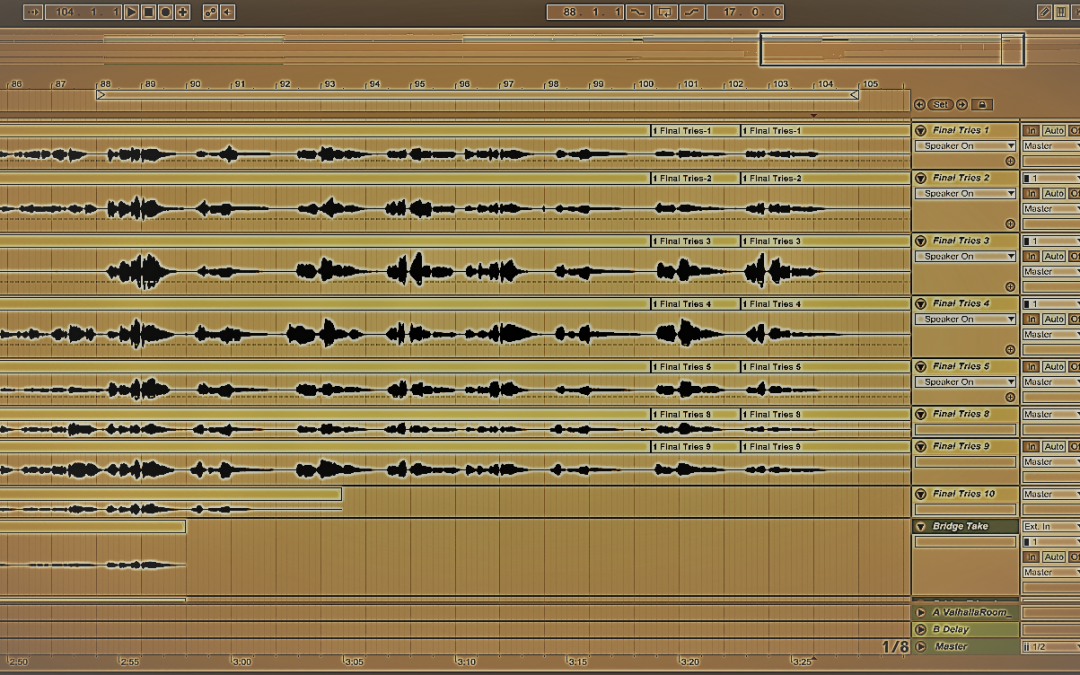 Welcome to Day 8 of my songwriting and production work on “Lost in the Wind“, the first song from my 10-song marathon that’s designed to overcome Finisher’s Block and get original, new music out into the world.

By the end of today, this song is nearly finished! If you’re just joining today, there’s a lot of background info you’ll want to catch up on. You can either go back to yesterday’s work, or return to the first day of the song’s creation.

Today’s long day of production work can be summed up in a sentence: I sifted exhaustively through eight different vocal takes and patched together a “final vocals performance” from the best sections of each of the 8 recordings.

This (I’ve recently learned) is a very common studio practice called “Vocal Comping”, which is explained in more detail off-site by this link.

On the other hand, I didn’t know this ahead of time… I just thought it would be a cool way to address and minimize my deficiencies as a lead singer.

So, instead of teaching you exactly what Vocal Comping is, I’m going to continue to walk through the subjective experience of producing the vocal comp for my original song, “Lost in the Wind.”

The first priority was to develop a workflow for assembling a final vocal ‘performance’ by chopping up multiple takes.

Again, I have ten vocal takes that I’ve recorded. Two takes had unusuably-low recording quality, leaving me with 8 useful takes.

To compare them against each other, I select a short 4-bar loop of music in Ableton (equal to one line of lyrics). Then I just go down the line, listening to one take after another while the music loops underneath.

Each take has a distinctive sound for that phrase. Several takes are simply lower-quality than the others, so those are easy to eliminate.

The only hard part is when there are several takes that I like - each will have different attractive sonic qualities, but I’m forced to make a decision. In these cases, I’ve tried to make the selection that has the best fit for the song. For example, if three of the takes all “sound good,” but one seems to fit the spirit of that line of lyrics better, then I try to find that version, and use it in the final vocal performance.

After giving this method a try for a few bars, I tested the results and it sounds awesome. I’ve only compiled the first five phrases of the first verse, but I’ve used five different vocal takes already, and the result sounds great – I sound like a better singer than I really am.. and the vocals are more consistent throughout the song.

Once I had my basic Vocal Comping workflow down, it was easy to see a huge chunk of progress in a relatively short time.

I finished assembling the Verse 1 vocal without much difficulty. Awesome. On to Verse 2 for more of the same.

I keep pressing forward on on assembling the Verse 2 vocal. Around midday I’m more than halfway through. Some decisions are easier and faster than others.

Whenever I need to give my ears a break from comparing vocal recordings, I study videos on mixing, EQ’ing vocals, reverb sends, and vocal compression like this one on mixing and this one on compression.

I realized midway through the work that I need to remove all Reverb and Compression from the different vocal takes, and also set their volumes roughly equal. This helps make better comparisons between what matters: the sound, phrasing, emotion, and recording quality of each vocal take.

Soon I have the Verse 2 vocal comp assembled. Now I need to go back through the two verses, which are currently made of separate vocal clips and balance the relative clip volumes.

Done! The vocal comp for the verses is sounding more solid, balanced, and cohesive.

With the verses completed, it’s time to move on to the vocal comps for the three Choruses. Yikes, I’m a little intimidated. This is even more complicated than the verses.

With ten recorded takes of the entire song, each take containing three chorus sections each, and with each Chorus repeating itself twice phrase-for-phrase, I have sixty potential takes to use for each line of Chorus lyrics.

Ugh, that’s a little overwhelming. Oh well, I’ll just have to get started…

Alright, I got Chorus 1 finished pretty quickly. Not as bad as I thought it would be. I’m getting into a rhythm: quickly comparing my options, then trusting my gut instincts about which take is best to use for each phrase.

I could just stop trying, and copy-paste the Chorus 1, but I’d really prefer the organic feel of multiple different choruses, so I’m pushing through. Now I’m halfway through arranging the second chorus vocals.

The end of the song feels very much in sight.

Getting Fatigued and Slowing Down

My notebook looks like an insane person scribbling for pages and pages. I’ve been working out my vocal arrangement with paper and pen. Now I’ve got all these sheets with a few cryptic, repetitive lyrics written on them. The numbers 1 through 10 are scrawled beneath them, with the vast majority of those numbers darkly x-ed out.

It definitely looks like something a madman would do for fun.

I’m currently half a day past my original deadline of 7 days, and there’s still more to do (mixing and mastering) before I can finish the song. But, this is still the first of my 10-song marathon. There have been many, many problems I’ve solved on this runthrough that will be easier to handle on the second song and beyond.

Have I wasted time? Not really. Other than a few days that lacked focus (usually due to exhaustion and staying up too late), I’m still proud of my concentration and effort.

Most especially, I’m happy with how far-out of my creative comfort zone I am. It’s forcing me to learn new skills and develop new personal workflows at a rapid rate, for each day of the project.

Almost Finished with the Vocal Comp

Holy cow, I’m getting sleepy and slowing down. Maybe I ate too much for dinner or maybe I’m just pushing myself too hard. It’s only 9 pm.

Phew, the second Chorus vocal comp is complete. It’s 10 pm. Onto the 3rd Chorus… the final push before Mixing and Mastering.

In some ways my editing work has gotten more efficient, because my system has gotten better.

In other ways I’m not very efficient at all, since by now I need to continually take breaks after every few minutes of editing - mainly to clear my ears and head when all the vocal takes are starting to sound the same.

Still, I think these mini-breaks may be important to getting a good musical result. I’m almost done…

Done for the Day

It’s midnight and I’m done assembling the complete vocal comp for the song “Lost in the Wind.” I’ve been taking breaks and also doing some advance study for vocal mixing.

I also spent some time adjusting relative volumes and EQs of each of the three vocal sections: Verse, Chorus and Bridge. It’s not perfect, but it’s better than it was. I’m trying to apply my ear and intuition more than any other senses or ‘knowledge.’

Ok, that’s enough. I’m taking a break at this point. I’ve worked this song mostly to death for one day - and I’ve probably been listening or thinking about it for close to 12 hours at this point.

Keep reading! Click here to go to the next day. The song is just a couple days away from being finished…

P.S. Don’t forget to listen to the finished song and leave a comment on the track!